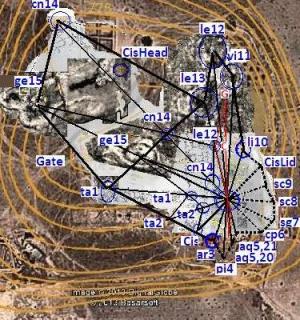 Gobekli Tepe houses A, B, C and D (not built in that order) are inside the later level IIA terrace wall, and avoided by later buildings. Level III has fifteen more structures. Circle E on the southwest plateau may be the floor of a Level III structure similar to circle C, dated later, however it could be a quarry trial erection before its pillars were moved to the hill, a procedure used on some other sites, such as much later at Stonehenge (see Furter 2016; Stonerpint, Stonehenge chapter).

Larger and more elaborate houses may be earlier, while smaller circles and rectangular houses or rooms may be later. However many sites are known where the stoneprint structure unfolded over years, even centuries (see Furter 2016; Stoneprint, chapter on Egypt’s Kings Valley and Queens Valley. And see Stoneprint Journal 2; Crop circles are natural artworks. Active fields unfold stoneprint over about 18 seasons).

Asymmetry of the outline of the potential Gobekli hill stoneprint, raises the possibility that the still covered structures could express a second, adjacent stoneprint, ‘geared’ to the excavated sector’s stoneprint, perhaps by sharing types 13, 14, 15, and/or 1 (see several double stoneprints in Furter 2016; Stoneprint, Mayan or Mexican chapter).

The axial centre may be on House C. However this feature is usually unmarked, or marked by a feature different from the periphery of types, thus the site grid identification above may be premature.

Orientation of the potential site stoneprint, flips around the orientation of the stoneprint in most houses. Village houses expressing types 11 Womb and 12/13 Heart are on the north, while most houses’ pillars expressing types 11 Womb and 12/13 Heart are south-south-east. Or to be more accurate, types 11 and 12/13 are expressed here by benches between certain pillars, parallel to the way that artworks express type 11 Womb on a midriff, and type 12/13 Heart with their invisible axial lines on a chest, instead of eyes as of the other type characters.

Two of the most interesting examples of this of regular ‘exception’, is in Egypt’s Valley of the Kings, where the hidden tomb entrances form two adjacent stoneprints, while types 11 Womb (of Hatshepshut as a regnant queen among the kings) and 12/13 Heart axes are on tomb chambers; and in the Valley of Queens, where the tomb chambers from two adjacent stoneprints, while types 11 Womb and 12/13 Heart axes are on hidden tomb entrances. These axial grids could now be verified by archaeological maps and GPS, but they were built over centuries, without a master plan, each covered by slope scree before the next was begun, with at least one accidental breach into an older tomb (see Furter 2016; Stoneprint, and an extract in another post). Gobekli half-sunken or kiva-type houses, typical of the Ice Age and Younger Dryas, were apparently infilled before or while others were built. Older houses are on the south-west slope, with a good but hidden view of game animal movements in a north-south gully east of the hill, where they were trapped as they moved to and from Harran plain. Gobekli hill also has a view of this fertile and strategic plain. Later houses are on and over the hill summit, perhaps ritual or memorial, or with diplomatic functions, similar to the Apollo temple precinct and treasuries at Delphi (see Delphi campus stoneprint, and a tentative Delphi landscape stoneprint, in the paper Blueprint on http://www.edmondfurter.wordpress.com)